Dribbling is a key technical skill that we hope all players become confident in. But the best dribblers know when to dribble and when not to dribble.

The days of old fashioned wingers hugging the touchline and attacking the full back have, for now, passed. Players instead look for quick passes and movements to get in behind the defence, placing themselves in positions closer to the goal.

We have heard many coaches say that dribbling invites pressure, and they are right. The more touches the player takes on the ball, the more pressure that they will be put under. However, we mustn't look at this as a negative thing, (which is something we tend to do). Can we look at this as a positive? If the dribbler is inviting pressure then that has created space elsewhere. The challenge is for the players to make the right decision, when do they dribble, when do they pass, when do they look for a different opportunity? If we can start to look at dribbling as a positive thing within the game then we will develop more technical players, capable of dribbling while also making the right decisions on the ball.

At the youngest of ages, from mini football, up until the U11 age group, it is our opinion that we let players dribble as much as possible, allowing them to express themselves. Some players are more natural dribblers, whereas others are more comfortable with passing the ball. We have to make sure we encourage these young players to do what they enjoy. If we are consistently telling a very young players to pass, instead of dribble, when dribbling is their favoured technique, then we are shifting them away from what they love. Players do well at what they are good at, therefore at these young ages we let them dribble, developing their strengths through doing and continued practice. At these young ages the players are more concerned about their individual performance, and love of the game. They are playing it for the thrill of scoring a goal, or dribbling past someone. We need to keep this love of the game and let them dribble as much as possible, allowing them to develop their game over these foundation years.

As players get older, from the age of 11 and above, we need to start encouraging and informing them about their decision making. Firstly, we need to develop more of an awareness about their play. Players should begin to scan the pitch and see where their team-mates and opponents are. When they do this they can build up an idea of the pressure they will be under when they receive the ball and what other opportunities will be available to them. When receiving the ball, if they have space, the first touch should be a step or two out of their feet, giving them time to look forwards and see what is happening around them. This will improve decision making on the ball greatly.

Once these players learn this, we will see the improvement in decisions as to when or when not to dribble. One of the main reasons players over dribble or lose the ball is because they are unaware of what is happening around them, this because they have their head down with their eyes fixed on the ball.

At times we can see players dribble and try and beat the same player 2 or 3 times, making it look like they are running around without any real direction. This is purely because of their awareness. It is most likely that they haven't got their head up and they are desperately dribble their way out of the danger they have put themselves in.

To give players an idea of the key areas of the pitch we like to have three basic areas that they primarily need to think of. When in these areas players need to think of the key responsibilities. However, if they have time and space they can move forwards with the ball at their feet. 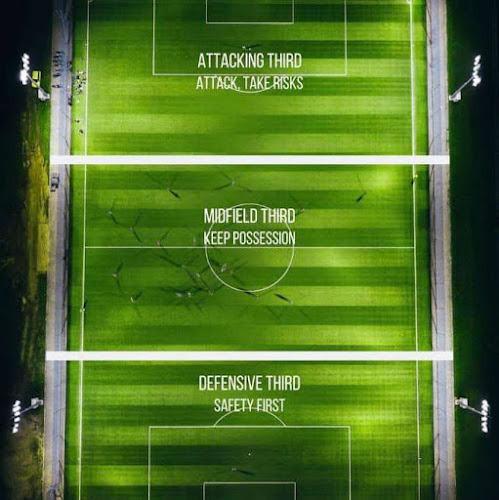 Coaching players to scan before receiving the ball and looking forward when they have it at their feet will give players the opportunity to make a clear decision on whether to dribble or not. In this attacking third of the pitch, if the player is one on one, we would encourage the individual to take on the opponent. This can cause havoc in the opposing defence and worry the defenders hugely. However, if we have an imbalance, such as two defenders against the one attacker, then it would be best to pass the ball to a player in more space with more time on the ball. Players can only do that if they look up and see the whole picture in front of them.

If we have the space then we want players to dribble. If others are in better positions then look to pass the ball.

The most important aspect is making sure players are aware of their surroundings. If they look up they will be able to make the decisions on when to dribble and when not to dribble.