Set pieces are a hugely important part of the game, but just how important are they in terms of goal output?

Last week we saw that the majority of goals are scored with the first touch inside of the penalty area, 54% in fact.

If we take a look at where the goals are scored then that can help change players’ behaviours, allowing them to realise where they should position themselves in order to get the best opportunities to score.

So this week we’re taking a look at goals from dead balls. Set pieces are a hugely important part of the game and if you are an accurate set piece taker you become very dangerous to the opposition.

Over the weekend there were nine Premier League games played, the tenth being tonight between Leeds and Crystal Palace. Those nine games brought us a total of twenty four goals and we’re going to take a look at how many goals were scored from dead balls. We’ll include penalties, direct free kicks and also goals scored resulting from a free kick into the area.

The reason for this is to see how important the technique of a good dead ball is. If you are a player it will show you just how dangerous a good dead ball can be to defend. One of the best goals from the weekend was James Ward-Prowse’s free kick against Newcastle, curling the ball from thirty yards into the top corner. Ward-Prowse is a great midfielder, comfortable on the ball with a good range of passing, but what makes him stand out is his ability to deliver, time and time again, from a dead ball.

In twenty-two Premier League matches this season Ward-Prowse has scored and assisted five goals each. That isn’t too bad from a deeper lying midfield role! Of those five goals scored, four have been from a free kick. His ability from a dead ball is fantastic and he’s managed to bring it into his game, making it one of his great strengths.

So if we head back to this weekend we can see the importance of a good delivery. Twenty-four goals were scored and six of those resulted from a free kick, not necessarily direct, but due to a good delivery into the box as well. 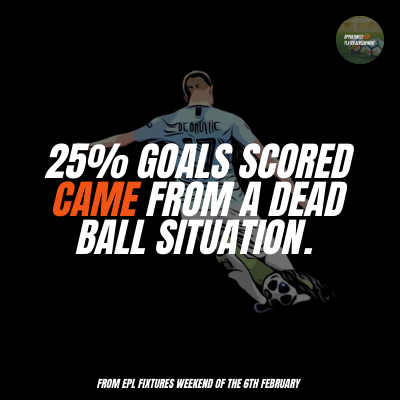 That is a lot!

Everton scored a last gasp equaliser at Old Trafford, caused by a deep free kick onto the box from Luca Digne. It should have been defended better, but it caused havoc in the defence, leading to Calvert-Lewin’s equaliser. Defending a good dead ball delivery is very difficult; get your delivery right and there is a good chance a goal can be scored.

Two of the goals were penalties and the other goal was scored from a corner kick. Get these deliveries right and it can be a huge part of your game.

I decided to look into this because it’s very interesting analysing the game, seeing where these key moments come from. As players’, you can look at these key moments, realise where they happen the most, and then put yourself in those positions more. Therefore, looking at this weekend’s fixtures has shown me the importance of good delivery into the box and how it can really benefit the team and your own game.

What’s great about dead ball situations is that players don’t need a lot of equipment or other players to practise them. If you want to practice your free kicks, like Ward-Prowse, then get down the local park with some balls, choose your spot, and aim for it. The repetition of this practice will help you significantly develop your game.

The same goes for corners, penalties and crossing from free kicks. The more you practice it, the better you’ll become.

Someone like Ward-Prowse will regularly practice, developing his technique, finding out what works best for him. Each player has their own technique, something that works best for them. Ronaldo was the first to introduce the knuckle ball, whereas Messi prefers to whip it with the instep; each player is different.

It’s best not to copy another player, instead trying out a range of techniques which will allow you to realise what works best for you.

If you’re a player looking to improve your game and add something to it, then developing the ability to be a danger from dead ball situations is a great opportunity.

It doesn’t happen over night. You won’t regularly hit the perfect ball into the box, or deliver an in swinging corner right to the head of your centre back, with a day or two’s practice. But consistent training will significantly help your game, giving you more chances to create and score more goals.

Manchester City are by far the best team in the country at the moment, with their recent performances being sensational. What typifies Manchester City is their ability to keep them ball, playing out from the back and creating overloads in the wide areas. Many of their goals come from cut backs to the penalty spot after a bursting run into the box, however a good amount of their goals still come from dead ball situations. Kevin De Bruyne, although he is injured at the moment, has delivered a number of fantastic free kicks for his teammates to score from. The very best, such as he, will practise this regularly, realising the importance of the dead ball. 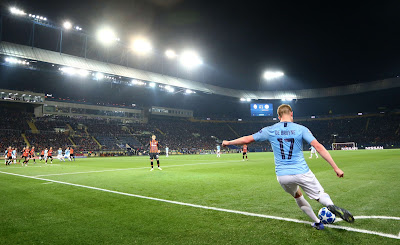 The ability to deliver a dangerous ball into the box is highly valued. If you want to increase your goal and assist output, then look to practise this more, working on your corner taking, wide free kick delivery and your shooting on goal, direct from the dead ball situation.

The more practice that you put in, the better that you will be.

The more you do, the more control and confidence you will have in your ability, which will only lead to good things.