Ten years in football is a very long time. Manchester City were building a team to challenge for the Premier League title under Roberto Mancini, with David Silva signing for the club in the summer transfer window.

Manchester United won their twelfth Premier League title and Newcastle staged one of the most memorable comebacks in Premier League history, drawing 4-4 with Arsenal after being 4-0 down.

Ten years is a long time in the game, and there have definitely been some very big changes in how it’s played. Formations, styles of play and players have all changed significantly.

Back then, it was still typical to play with two strikers up front. Manchester United would regularly line up with Wayne Rooney and Dimitar Berbatov as their front men, while Chelsea had the colossal Didier Drogba and Nicolas Anelka.

So back in the 2010/11 Premier League season it was common to see two top strikers on the majority of teams, with wide players getting plenty of balls into the box. But over the next ten years, the game has changed. Teams aim to have far more possession and the goals are getting shared between a whole variety of positions.

It is no longer just the job of strikers to score the most goals; in many cases at the moment the responsibility is falling on the wingers, or attacking midfielders.

So, today we’re going to look at the top 12 goal scorers from the 2010/11 season and compare them to this current season.

Are there any differences, or similarities that we can pick up on? Sometimes the stats can provide us with some interesting information that can help you develop your own game and understand what you can do to reach the next level. 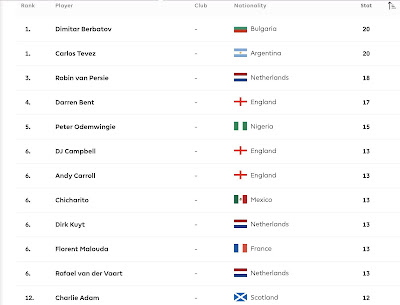 The top eight goalscorers were all centre forwards. Manchester United’s Dimitar Berbatov led the way, all the way down to his teammate Javier Hernandez. Beneath that, to make up our top 12, we have Dirk Kuyt of Liverpool, a striker, although regularly played out wide, Chelsea’s French winger Florent Malouda, attacking midfielder, Rafael Van Der Vaart from Spurs and surprisingly, Stoke’s central midfielder, Charlie Adam.

The top 12 was dominated by strikers, with eight of the leading scorers playing up-front. This shows us that, ten years ago the vast majority of goals were scored by these players, the focal point of the team.

But have things changed? In this current season, after match week 25, there may be some different findings. 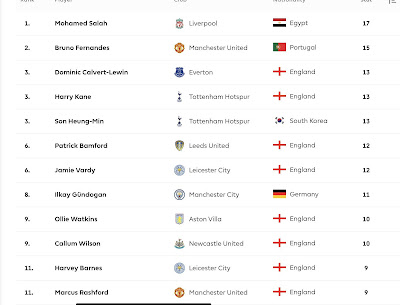 And it’s rather interesting reading. The first and second top scorers, Mo Salah and Bruno Fernandes, are not strikers. Salah, playing wide right, has scored 17 league goals, with attacking midfielder, Bruno, scoring 15 so far this season. Behind them we have two English strikers, Harry Kane and Calvert-Lewin, both on 13 goals a piece, but interestingly there is no standout striker running away with the lead. Level with these two strikers is Son Heung-Min, so in joint third in the list we have three scorers, two of them being the leading forwards and one, Son Heung-Min, being a winger.

If we break it down into positions we have six strikers in the top twelve, four wingers, and two attacking midfielders.

Back in 2010/11 it looked different. Eight strikers led the charts, two wingers, a central and attacking midfielder made up the rest.
This can show us how the game has changed. Goals are more evenly spread out over the attacking positions now. Wingers aren’t seen as just the creators, they are actually seen as an important goal scoring position nowadays.

You can almost think of them as strikers, but just out wide. Their job isn’t to just set up chances, but they have to have a goal output.

So, if you’re a winger, get in the box as much as you can, try and get on the end of through balls and crosses, adding to your scoring figures.

The other change is the importance of attacking midfielders. Although there isn’t a huge difference in the number of attacking midfielders between the lists, we can see how important they are as that link player, helping join the midfield and attack, which allows those wide players to get further up the pitch, and score more goals.

What is noticeable is that these front three positions - the strikers, wingers, and attacking midfielders - all feature heavily on the list.

The goals are fairly evenly spread out.

We can almost look at these positions as an attacking unit, rather than individual positions. The days of relying on strikers to score the vast majority of goals have gone, for now.

Instead, the attacking unit are expected to all be very productive. This shows us that there is a real importance, for all players in these attacking positions, to have a desire to score more goals.

So if you play in either the striker, winger, or attacking midfield role, then it’s important to try and increase your numbers. More goals and more assists will help you take your game to the next level.

If you play in these positions, take risks on the ball. Don’t be afraid to shoot and begin to be more ruthless in front of goal.

The attacking positions are becoming more fluid, with interchanging of positions and great flexibility in the player’s ability to play in different positions.

But to score more goals we’ve got to shoot more, make runs into the box more, and become much more clinical.

The role of players, especially in wide positions has changed significantly over the last ten years. What you’ve got to do is make sure that you are adapting as a player.

Keep being a threat to the opposition, and if you’re in the attacking unit, score more goals.